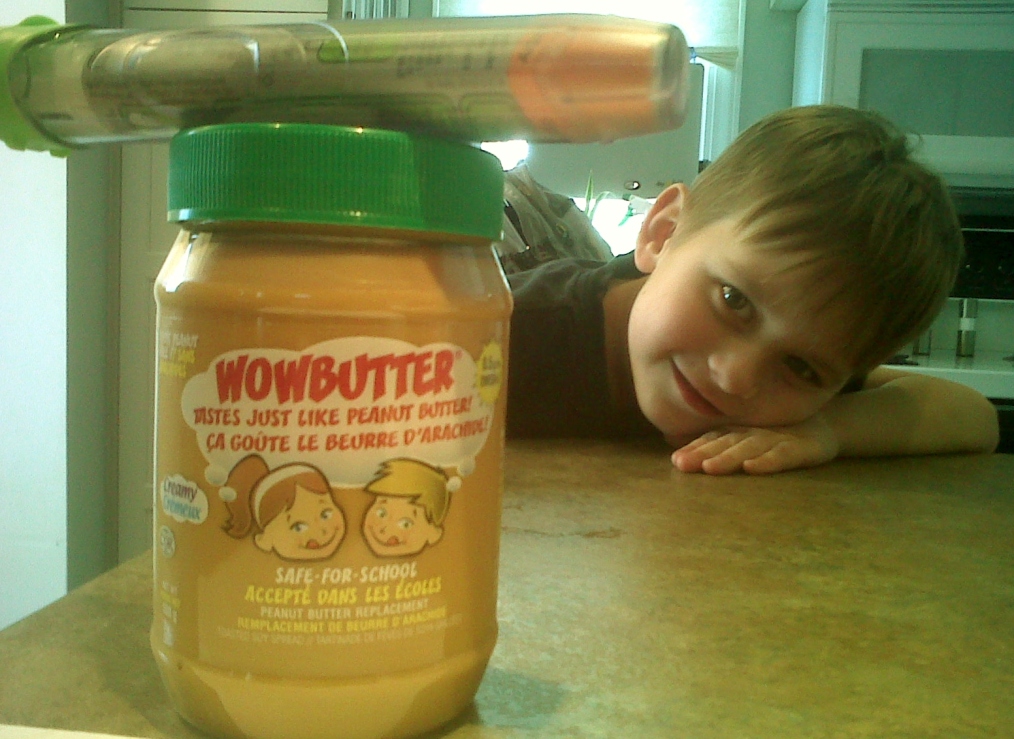 Shortly after having my first, I remember being with some fellow moms/friends and they were talking about the idea of introducing peanuts to your toddler in a vehicle just outside the hospital; I thought this was the most paranoid idea and giggled to myself a little at the image of feeding my son a peanut butter sandwich in the emergency parking lot.   I thought to myself, why bother being paranoid there is such a slight chance of a child being allergic.

A year or so later over Christmas holidays we flew out to see my brother in California.  On our way there we had a lay-over, and since most air lines were no longer serving meals we picked up a meal to tie us over on the next flight.  I went to a really cool Thai restaurant and got myself a delicious peanut-y stir fry.  I had barely eaten all day and I was starving!  After getting our family seated but before they safety exit spiel, I took out my delicious peanut-y stir fry and dug in.  Now I know what you’re thinking, my son ended up having a reaction and we were forced to get off the plane and go to the hospital and I can assure you this is definitely NOT what happened.  But the flight attendant got on the loud speaker and asked all passengers to please refrain from eating peanuts for the flight as there was a “little guy” with a severe peanut allergy on board.  I finished chewing my mouthful and lidded my delicious peanut-y stir fry.  I was a little disappointed and starving, if I had only known earlier I would have got something else to eat!

A month later I tried feeding my son a peanut butter cookie for the first time and he was not interested, a few days later I was able to get him to eat a pint size amount of peanut butter and no reaction!  Hooray for us!  Oh wait, reactions usually happen on the second exposure!?!  The next day I slathered apple slices in peanut butter but he would only eat a miniscule bite!  That’s when I realized the joke was on me.  I spent the next few months in denial, saying “It could have been the apple… right???”  Once diagnosed we began a purge of our home, threw out jam, ice cream, a food processer that I used to make our own peanut butter in, all things that could have been cross contaminated and anything that said “may contain traces of…” or “contains traces of…” or “contains…”

Which now brings me back to the three years later, or as I like to call it; now.   One of our other peanut free families in our son’s class gave us a sample of this soy butter to try saying it was just like peanut butter.  Now, we have tried almost every kind of soy nut, sunflower, blah blah blah butter you could think of and nothing has even come close to passing the test.  I opened up one of the samples and dipped my pinky in it, “WOW, you need to try this!”  He did the same and gave the same response.  It smelled, tasted and even looked like peanut butter.

You could hear our youngest in the background parroting one of his first words, “Wow, Wow, WoW, WwwwooooowwwW”  I grabbed the bread and jam and made my son’s sandwiches for lunch.  We held our breath as our oldest, Mr. Anaphylaxis to one bite after another, hoping this wasn’t some cruel joke and his face would start swelling up because we had actually just given him peanut butter.  But the only thing that happened was that he finished his whole sandwich and asked for a drink.  WOW.

Not the funny thing in all this (and I’m not really one to promote brands of anything via blog) is the name of this stuff, Wow Butter.  That’s right! So the aftertaste gives off a very slight hint of soy, but we had never tasted something so close!  We got online as fast as we could and looked it up to see where we could find more.  It took a half day to track it down, and when I finally found it, I bought 4 jars.

Now for the scary part:  As much as we were in awe of this stuff, a knot formed in our stomachs… how are our teachers supposed to know the difference between a peanut butter and Wow butter sandwich.  Obviously a teacher wouldn’t question the sandwiches we have labelled and sent with our son, but what about non-allergic children?  We thought they should maybe make it green or blue, but then you look right on the jar’s lid and it says to label all sandwiches made with wow butter and the website encourages parents to send information from their website to their school.  The other scary part:  is our son supposed to know the difference?  If it smells, looks and taste like peanut butter, is there a risk that he will get confused?  It’s amazing how something that has been created to help us also forces us to adjust our family rules for the sake of risk reduction.

We have decided that this fear of potential mix-ups will not keep us from recommending Wow Butter to others, but we will ask kindly that if you do find a use for Wow Butter; please oh please label your children’s sandwiches every time. If someone has to ask please don’t take it personally because it’s really that amazing.

P.S.  Did you know that hand sanitizer does not get rid of peanut residue?

About a month after the passing of our beloved GG, my husband was in an accident at work.  Without getting into too many details he had a serious fall that could have left him paralyzed or worse, but instead he amazingly landed on his feet and left hand after falling from over 17 feet.  While the last three months have consisted of Physio Therapy and Doctor Appointments, I am very aware that things could have looked much differently and not a day goes by that I don’t know it.  While having my partner home has been difficult at times, it has indeed made us stronger.  He has healed up quite nicely and has recently returned to work.  He would credit his cat like reflexes or skateboarding skills for landing on his feet, but we both know that things could have turned out much worse!

We took advantage of my husband’s time off over Christmas and drove out to visit my dad’s side of the family.  It was great to see my grandmother, my aunt, uncles, many cousins, and cousin’s children!  While out there, the kids caught some crazy super cold that was filled with puking and coughing.   Since our youngest son’s bout with Pertussis (whooping cough) he has become a germ magnet and gets sick very easily.  So while on our 14 hour journey home, his crazy super cold got much worse.  By the time we got home, he had a really bad fever and was coughing up junk.  We took him to the hospital and chest x-rays confirmed that he had developed pneumonia.  Now the kicker in all this was that it was right over our oldest son’s 5th birthday.  Thankfully he didn’t notice this fact until only a couple weeks ago, after he went to another child’s birthday party.  Our youngest has since recovered (though he has another cold and an ear infection right now) and our oldest has been spoiled enough to make up for the lack of presents or party on his birthday.

Two weeks following our oldest son’s birthday, our youngest son turned 1!  Lately we have kept all birthday’s low key and I have been able to let go of my guilt and replace it with appreciation for my family’s existence!  Looking back at our youngest son’s life I amazed that while being sick with all the many illnesses he’s experienced, he has been able to hit all his milestones!  He was walking (and I mean WALKING!) shortly prior to 8 months, he was climbing weeks later and has been a happy little boy that doesn’t let much interfere with his play time.  I have been inspired by his resiliency and tried embracing it in my own life.  This is the boy that I would wake with many, many times a night pounding on his back as he stopped breathing due to pertussis, this is the boy that would cough and choke on his own phlegm several times a night because of pneumonia; I remember holding my breath in until I would hear him take his first breath in. It is amazing that such a little person can have so much strength; his illnesses have made teething seem like a mosquito bite.

While we have had some of the less then helpful opinions on the causes of our challenges, we have also been very fortunate to have such awesome people in our lives that have helped make our year a good one.  I believe that when you live in a supportive community, it becomes easier to be resilient; and our family has had to be resilient.  I will abstain from listing all of our struggles of the year, because I’m set on moving forward.  I love our family’s capacity to deal with challenges and our resiliency when it comes to struggles.  We have not always been able to hold it all together, but we have definitely managed to stay and grow together; which is the best possible outcome in the face of adversity.

So, I will end with this,

To my family: I love you to the moon and back and I am proud of you and proud to be a mom, wife and daughter!

To my friends and community: I have so much appreciation for the way you have supported us in both simple and large ways.

P.S. It’s hard to make supper in the dark; So to make it easier, if you are able, turn on the lights.